Stemming from the legendary George Orwell’s “Animal Farm” book, the updated version of the pigs’ seventh commandment has earned its place in history as a way to express unfair practices over other individuals/groups/people. Similar expressions exist in other languages to say the same thing, for instance “what is yours is mine, and what is mine is also mine”, which I merit occasionally.

All the above showed up in my mind like salty pop corn during a Saturday visit to the movies, when I read several angry commentaries against an experimental confirmation that signs of a fifth fundamental force in nature may show up in a nuclear physics process. Now, there are several keywords mentioned in the previous sentence that I do not want to analyze in this post in detail. I leave it for the most capable writers, those with a skilled editor and an efficient spellchecker. I choose to be an anomaly in this land of normality where sweet words come out of scientific minds trying to explain deep physics meanings to the general public. What is critical in the present post is to understand a few things.

CERN has been a leader in subatomic physics for over 50 years when it first started with the foundation of Batiment 1 off Geneva, as a European Center for Nuclear Physics Research. As it expanded and progressed in infrastructure and capabilities it has transformed into a high-value brand name, especially after the announcement of the holy grail discovery, the Higgs particle in 2012. The pursuit was ended, confirming that the symmetrically elegant Standard Model was complete. But not the description of our world at all. Attractive terms started jumping out as the hunt of the Higgs was reaching the end. The plane was landed but the connection flight to absolute knowledge at all dimensions was nowhere to be seen. Darkness prevailed. Together with dark matter, dark energy and a lot of nasty questions about the role of gravity, the Big Bang, the cosmological black holes the mass of neutrinos and many more. For a physicist these questions are actually a treasure; but not for a big brand name. The brand name has to obey financial market rules, expand, produce profit (in actual product or intellectual property). And this is a problem, because scientific merit is not always compatible with market values. And suddenly, the whole particle physics domain is in crisis.

I sympathize, sometimes I even envy people who base their whole careers in pursuing a single dream and fail. It happens to all fields, it is not a unique case for particle physics. But we need to understand that failure is not the issue. The scientific journey is the profit, the experience in pursuing firm evidence is the merit, the discovery, it it happens, is just a final destination. And this joy can be reflected on several aspects of our world, as we see the applications of science and technology developed throughout this journey to have a positive impact on people’s lives.

A fifth fundamental force, if it exists, can not be directly associated today with a positive impact on the world. This is the curse of fundamental science, in general. The true profit of humanity shows up generations after the initial discoverers have lived. However, as in previous cases with the third and fourth force, that is the strong and weak nuclear force inside the atomic nucleus, a potential discovery opens a whole new world and a great opportunity for us to understand our fundamental questions about the universe we live in. The pursuit of scientific truth has resulted in crazy theories, some away from the “reason” of every day life. Take quantum mechanics for example or the general relativity. Who remembers that physicists had invented the ether, a hypothetical medium, which was responsible of creating all deviations from the classic physics the experiment could reveal? Initially, Uncle Albert revolutionized thinking, not physics itself. New physics laws emerged after experimental confirmation of the new theories had been validated.

Now, this last word is very important. Validation is essential for physics. Physicists criticize things, sometimes very aggressively when new theories develop, however, a validation of an experimental result by independent researchers or methods is essential. It is a prerequisite of the scientific method.

In 2016, during an experiment at ATOMKI in Debrecen, near the east Hungarian border, Attila Krasznahorkay and collaborators have hinted on the existence of a light neutral boson particle observed in a nuclear transition in beryllium-8 [prl]. The announcement was a thunder strike to the community. “- Nuclear physics??? This is ancient stuff! – They can not detect dark matter candidates, how could they?” The news has blazed the media and people got excited, started talking about dark matter, dark photons, new forces of nature. Others serving the Big Brand laughed or got angry. Some talked about wild imagination, some about low statistics, some about bad analysis. The latter seem to forget that the key word is, still, validation. Attila and collaborators are very skilled researchers and experienced experimentalists. Their device is optimized for the nuclear investigation they had in mind, so can their results be true? 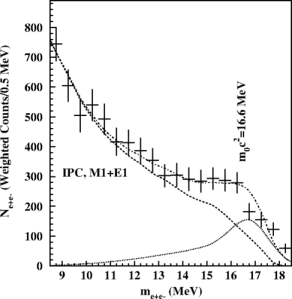 The group has recently published the second attempt to repeat their first results [arxiv] this time with much better statistics and an even more convincing hint that something, indeed, is going on. Flame war again. The disoriented Big Brand with no SUSY in hands, or some other bright lighthouse to guide their way, backfires. Some become skeptical, some can not still believe it, some turn to blame. Again the same arguments, bad binning, 6 sigma, not 11, no CERN mentality in analysis, the curve goes through all points, bla bla bla. The missing point again in the criticism: validation.

The results, true or not, need to be checked further. Scrutiny of the data and the methodology is a must in this case. And it has to come from independent labs and people who are not related to the original researchers. If it is an artifact of 6-7 sigma or bad analysis or real physics it still needs to be examined thoroughly.

So, dear fellow researchers of the Big Brand, next time you read the news about a discovery of new particles or hints for new theories or whatever coming from nuclear physics, do not raise your nose high. Be critical and open minded, yes. But do not act like the pig in Animal Farm. Science is a universal good, not a manufactured brand. And we have to support it and expand it. If you fight your science fellows you might look like you are defending your theory of ether. And we all know what happened to ether and its supporters.

This site uses Akismet to reduce spam. Learn how your comment data is processed.